The following is a list of tracks and cameos by Deadmau5 that are featured in video games.

Absolut Deadmau5 is a VR experience that is a direct homage to Deadmau5, which includes references to his car collection and his cat Meowingtons. Zimmerman himself was involved with the development of the game, providing animations for his avatar via motion-capture. The game features the single "Saved".

Deadmau5 appears as a virtual character in the video game DJ Hero 2. He is also a playable character, however he is only playable if unlocked in story mode. It features remixes of the songs "I Remember", "Move For Me", and "Ghosts 'n' Stuff".

Family Guy: The Quest for Stuff

Deadmau5 was an unlockable character featured in a limited time event in Family Guy: The Quest for Stuff during 2015. Unlocking him would give the player a redemption code that they could use to redeem a free download of 4x4=12.

In Ghosts'n DJs, the player can unlock a mau5head power-up to gain Nyan Cat bullets. The game features "Polaris”, “4Ware", “GG", and "Three Pound Chicken Wing" when changed in options.

Deadmau5 appears as a non-playable character after you reach the top of the tower in Goat City Bay. Finding Deadmau5 gives you the ability to play the unreleased track "Petting Zoo". This also gives you a mau5head and the title 'deadgoa7'.

A Deadmau5-inspired character was featured in Nonstop Knights, unlockable after you beat The Deadmau5 Challenge. Zimmerman used the design in the cover for the private preview of the track "Legendary".

Deadmau5 appears in Minecraft as a skin. Markus Persson was a fan of Deadmau5, and Deadmau5 was a fan of Minecraft. Because of this, Persson made a skin for Deadmau5 with ears. But the ears weren't part of the skin, they were part of the name tag. So if a user changed their name with the Deadmau5 skin, they'd lose the ears due to a bug. 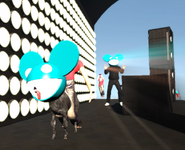 The goat wearing a mau5head in Goat Simulator.

Deadmau5 in Family Guy: The Quest for Stuff.

The deadmau5-inspired character in Nonstop Knights.

Deadmau5 and Meowingtons in Absolut Deadmau5. 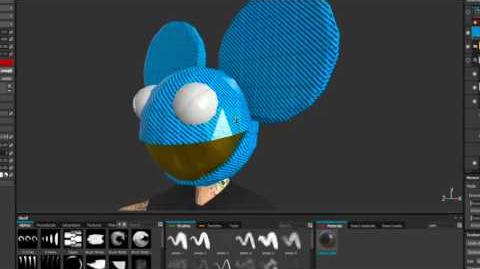 The deadmau5 topper in Rocket League.