deadmau5
"Professional Griefers" is the third single deadmau5 released from his sixth stuido album, > Album Title Goes Here <. It features the vocals of Gerard Way, and was released on August 14th, 2012.

The video starts with a family in a trailer watching a UFC match, which features Zimmerman and Gerard battling with giant robots. It then shows various different people watching the match. In the match, Gerard is shown to winning, until a robot version of Meowingtons messes with Gerard's control by chewing the wires. This results in Gerard's robot not functioning, which Zimmerman takes advantage of and wins the match. The video ends with Meowingtons disabling Zimmerman's robot, which in turn makes it fall over, crushing the dome. Meowingtons then is seen walking on the remaining debris, until he pounces towards the viewer.

God can’t hear you,
They won't fight you
Watch them build a friend just like you
Morning sickness, XYZ
Teenage girls with ESP

Cell-infection,
Mass-destruction
Program for the final function
Lab-rat king, rescue team
Save me from the next life 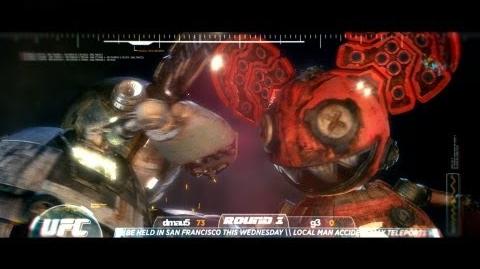