Meowingtons, also known as Professor Meowingtons, is a pet cat belonging to Deadmau5. Over the years, he has become a trademark in Deadmau5 related media, such as the Meowingtons Hax Tour being named after him. In 2012, he appeared on the cover for > Album Title Goes Here <, and was going to be the main character of the scrapped animated project, Meowingtons & Mau5.

In 2015, Zimmerman attempted to register a trademark for Meowington's name. However, it got rejected as the trademark was held by an online cat themed retailer called Meowingtons. The site was founded in 2014, leading Zimmerman to petiton against it, citing his pre existing use of the name.

In 2017, Zimmerman was sued by the retailer for trademark infringement and unfair competition. The owner claimed that she did not name the site after his cat. On May 15th, Zimmerman filed a countersuit against the owner with intentions to take down her domain and website.

The dispute was eventually settled in 2018. 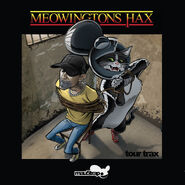 Meowingtons in how he appears on the cover of Meowingtons Hax Tour Trax.

Meowingtons from the "Professional Griefers" video.
Community content is available under CC-BY-SA unless otherwise noted.
Advertisement