Joel Thomas Zimmerman, better known by his stage name Deadmau5, is a Canadian electronic music producer from Toronto, Ontario. Zimmerman produces a wide variety of styles within the house genre and other forms of electronic music.

Zimmerman was born in Niagara Falls, Ontario on January 5th, 1981 to Rodney and Nancy Zimmerman. He was the the middle sibling between his older sister Jennifer, and his younger brother Chris.

As a child, Zimmerman took piano lessons and grew up with an interest in computers and video games. He started to make music in the mid 1990s, making chiptune tracks from old computer chips. His style eventually evolved to become influenced by IDM and trance.

After graduating from Westlane Secondary School, Zimmerman moved on to become a programmer and composer for an online music licensing company.

In his teens, Zimmerman found a dead mouse in his computer while trying to chat with a friend online. Members of a chat room started to connect him with the story, giving him the nickname "dead mouse guy". Zimmerman tried to change his screen name to "deadmouse", but being too long, he had to shorten it to "deadmau5".

Subsequently, Zimmerman created the iconic "mau5head" while learning how to use 3D modelling software. He was then given the idea to wear a helmet based on the logo by one of his friends, Jay Gordon. He first performed on stage with a mau5head in January 2008 in Halifax, Nova Scotia.

He created "deadmau5.com" and began uploading songs to SectionZ under the alias Deadmau5 in 2002.

The vinyl pressed single "I Don't Want No Other" released under Dred And Karma was Zimmerman's first official release in 1999.

His first remix was of a song by the band Revenge of the Egg People, titled "I'm Electric". This remix was released in 2002 under the name Karma K.

Zimmerman released his debut studio album, Get Scraped, on July 26th, 2005 under the independent record label ZOOLOOK. In November 2006, he released his second studio album Vexillology under Play Records, with this album being the first to include Zimmerman's signature house and techno influenced sound.

In 2007, Zimmerman founded his own record label called Mau5trap, which released Random Album Title in 2008, along with Ultra Records and Ministry of Sound.

During 2008, Zimmerman left Play Records. However, due to his contract agreement, Play Records was able to claim ownership of tracks he had made during the time he was signed to the label. This led to the release of the At Play series and future controversy.

Deadmau5 released his fourth studio album For Lack of a Better Name  in the United States on September 22nd, 2009, and on October 5th internationally. The album contains two of Zimmerman's greatest hits: "Ghosts 'n' Stuff" and "Strobe".

Zimmerman was the house DJ for the 2010 MTV Video Music Awards and MTV PUSH artist of the week on August 16th, 2010. He expressed his gratitude towards Lady Gaga and David Guetta for bringing house music into the pop scene and paving the way for him to the mainstream.

On August 9th, 2012, Zimmerman announced his upcoming sixth studio album,  >Album Title Goes Here<, which was released on September 24th of the same year. In December 2012, FUSE TV named "Professional Griefers" one of the top 40 songs of 2012.

In November of 2013, Zimmerman deleted three years worth of music from his SoundCloud account, replacing them with the 7 EP. These tracks were named after the Latin translations for the Seven Deadly Sins: "Acedia", "Avaritia", "Gula", "Invidia", "Ira", "Luxuria", and "Superbia".

On January 7th, 2014, Zimmerman announced on his Twitter account that his highly anticipated seventh studio album was completed, and on May 10th he announced that it will be titled While(1<2) and released on June 17th.

On December 2nd, 2016, Zimmerman released his eighth studio album, W:/2016ALBUM/, which referred to the location of the album on his computer. The album consists of tracks produced with a de'deluxe, and includes tracks he had been working on since 2015.p

He also announced at the end of 2016 that he will be releasing a project containing tracks he produced in the late 90s/early 2000s. This turned out to be Stuff I Used To Do, which was released on March 3rd, 2018.

On March 25th, 2017, Zimmerman began a tour called "Lots of Shows in a Row" with his new Cube 2.1 stage to promote W:/2016ALBUM/. He began touring in North America for two months and then toured the rest of the world until October 31st.

On September 24th, Zimmerman confirmed via Twitter that his next album is in the works.

In 2010, Zimmerman adopted a cat he named Meowingtons. Since then, Meowingtons has become a trademark to a lot of deadmau5 related work. Zimmerman named his 2011 world tour "Meowingtons Hax Tour" after his cat, and even put his face on the cover of his sixth studio album. Zimmerman then collaborated with Sol Republic to create a brand of headphones inspired by Meowingtons. In 2017, a preview of the animated project Meowingtons & Mau5 was shown via a livestream.

Zimmerman began dating Lindsey Evans shortly after meeting her at the 2010 MTV Video Music Awards in September 2010. Evans eventually moved to Toronto to live with him for a while. However, one year later Zimmerman announced that the two had broken up.

In September of 2012, Zimmerman ??? Kat Von D. After breaking up in November 2012, they shortly rekindled their relationship. On December 15, 2012, Zimmerman proposed to Von D on Twitter, and they announced that they would marry in August of 2013 with an aquatic-themed wedding. They both have gotten several matching tattoos, including the numbers "289m3d22h" on both of their arms, as well as two black stars underneath their eyes. Zimmerman moved to Los Angeles to live with Von D. In June 2013, Von D announced that they had ended their engagement.

In 2015, he purchased a multi-million dollar mansion in Milton, Ontario, Canada. He claims to have had to build a giant connection tower along with the house, due to area he lived in being an area with little to no internet connection.

On August 12th, 2017, Zimmerman got married to his longtime girlfriend and fiancée Kelly Fedoni.

Zimmerman as a child.

Younger Zimmerman in his first studio. 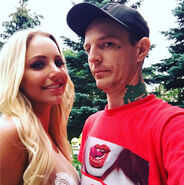 Zimmerman with his wife, Kelly.
Community content is available under CC-BY-SA unless otherwise noted.
Advertisement